Bangladesh is a country on the continent of Asia

Bhutan’s historical period begins at about 747 A.D, when the revered religious leader Guru Padama Sambhava came from Tibet and introduced Buddhism to the country. Before the introduction of Buddhism, the country was likely to have existed independently, but without a central authority. Bhutan’s recorded history is connected to Buddhism. Throughout its history, Bhutan has maintained its independence. In 1907 it became a monarchy, but an unusual one. Because of the rural setting of the Bhutanese monarchy, close contact between the king and his people is encouraged. The king lives simply, being more concerned about his subjects than with rituals. Bhutan has been quite isolated historically but has recently become more progressive and democratic. In 1999 the government stopped restricting television broadcasting and allowed citizens to have the internet. In 2008 Bhutan became more democratic, transitioning from an absolute monarchy to a constitutional monarchy. 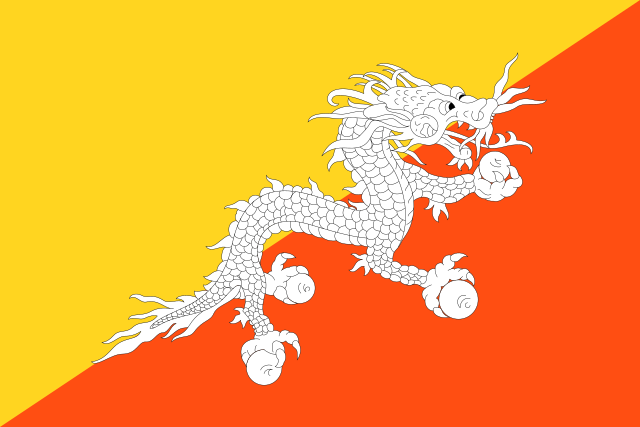 Bhutan is a landlocked country in southern Asia. It is located in the eastern Himalayas. Bhutan is bordered by India and China. The physical geography of Bhutan is mostly steep, high mountains as well as swift rivers. About 71% of Bhutan is forested.

In the northern regions of Bhutan, it is very cold with weather conditions similar to the arctic. But in southern Bhutan temperatures are hot and humid in the summer, and cool in the winter. Monsoon rains are usually very heavy. Bhutan has four seasons, Spring, Summer, Autumn, and Winter.

1. The raven is the national bird of Bhutan.

2. There are no traffic lights in Bhutan.

3. It is mandatory to wear traditional clothing to certain events.

4. Bhutan has free education and healthcare for all.

5. Bhutan is a democratic, constitutional monarchy.

6. The national animal of Bhutan is Takin (a goat-antelope).

7. Bhutan was one of the last countries to get internet and TV.

8. Animal slaughter is banned in Bhutan.

9. Plastic bags have been banned in Bhutan since 1999.

10. Bhutan is home to the highest unclimbed peak in the world.