Bulgaria is a country on the continent of Europe

The first group of people to leave lasting traces in Bulgaria were the Thracians. They were a tribal society and were skilled horsemen, farmers, and artisans. Thracians generally lived in fortified villages on hilltops, avoiding urban life. Eventually, they were conquered by Macedonian king Alexander the Great, and later the Roman Empire. At about 1000 AD, Bulgaria became a part of the Byzantine Empire. By 1396, the Ottoman Empire had conquered Bulgaria, and it remained under Ottoman rule for the next five centuries. Following Ottoman rule, Bulgaria was independent for a time, until becoming a Soviet State after World War II. Bulgaria remained a communist state until the late 1980s. In 2004, Bulgaria joined NATO, and in 2009 joined the European Union.

The Bulgarian flag is a tricolour with white, green, and red. The white stands for peace, love, and freedom, the green symbolizes the agricultural wealth of the country, and the red is for the independence struggle and military courage.

Bulgaria is part of the Balkan Peninsula and is situated in South-East Europe. Its borders are Romania to the north, The Black Sea to the east, Turkey and Greece to the south, North Macedonia to the southwest, and Serbia to the West. Bulgaria has a diverse landscape, with plains, plateaus, mountains, basins, gorges, and deep river valleys. 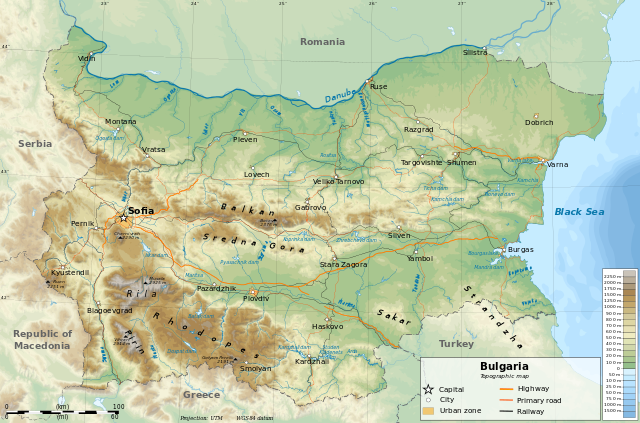 1. Bulgaria has a parliamentary system of government.

2. Bulgaria’s national instrument is the bagpipes.

3. Bulgaria is the homeland of yogurt.

4. There are 10 World Heritage Sites in Bulgaria.

5. The lowest point in Bulgaria is the Black Sea.

7. The Bulgarian language is written using the Cyrillic alphabet.

10. The currency of Bulgaria is the Bulgarian Lev.