Cambodia is a country on the continent of Asia

From 900 to 1400 AD the area that is now Cambodia was under the rule of the Khmer Kingdom. This society was very agricultural, and most citizens were farmers or craftsmen. In 1431 the capital of Cambodia was captured by the Thai people, causing the capital to be moved to Phnom Penh, where it is today. Cambodian power began to decline and in the 16th century, it became under loose control. The capital was conquered by the Thais once again in 1594. Being in-between the powerful countries of Vietnam and Thailand, Cambodia was invaded many times throughout the next centuries. In 1863 Cambodia became a protectorate of France and was under French colonial rule for 90 years. During World War II, Cambodia was occupied by Japan. In the 1970s, Cambodia became involved in the Vietnam War. After the War, things only got worse for Cambodia. The country was taken over by a group called the Khmer Rouge, led by a man named Pol Pot. The Cambodian people were forced into horrible work conditions and eventually, about one-fifth of the population was killed. 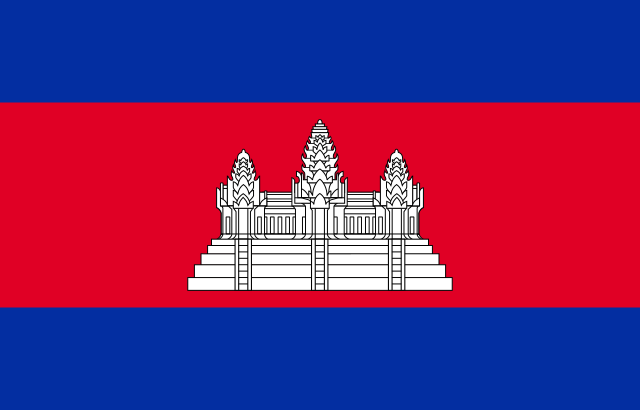 The Cambodian flag is made up of three horizontal bands of blue and red. In the centre of the flag is an emblem of the Angkor Wat Temple. Cambodia is the only country that features a building on its flag design.

Cambodia has a tropical climate, with warm temperatures year-round. There are two seasons in Cambodia, as a result of monsoon winds. From May to October, southwest monsoon winds result in a lot of rain. From November to March, milder winds from the northeast monsoon bring lower humidity and less rainfall.

1. The Cambodian currency is called Riel.

2. The Kouprey, or ‘forest ox’ is Cambodia’s national animal.

4. Traditionally, birthdays are not celebrated in Cambodia.

5. Cambodia is home to many rare animal species.

6. The Cambodian New Year is celebrated in April.

7. There are still many active landmines in the country.

8. Insects are widely eaten throughout the country.

9. About half of the population is under 15 years old.