Canada is a country on the continent of North Amercia

The land that is now Canada was first home to indigenous peoples who lived off of the land. The first Europeans to discover Canada were the Vikings when in 1001 Leif Ericksson landed and named the area Vinland. The Vikings had to later leave their established colony because of conflicts with the natives. In 1497, King Henry VII sent Italian explorer John Cabot on an expedition across the Atlantic. Cabot reached the east coast of Canada, discovering rich fishing waters. In 1534, Frenchman Jacques Cartier explored the Gulf of St. Lawrence and claimed the land for France. Quebec later became a crown colony of France in 1663. Britain and France continued to gain possession over different territories, leading to great conflict and dispute. This led to the Seven Years War (1755-1763) when both countries fought over the new colonies. The Treaty of Paris ended the war, giving Britain control of the North American colonies besides St. Pierre and Miquelon, which were still controlled by France. Canada officially became a country on July 1, 1867. The three original provinces were Canada, Nova Scotia, and New Brunswick. The province of Canada was later split into two–Ontario and Quebec. Over time, the Country expanded to the 10 provinces it has today.

The Canadian flag consists of a red field with a white square at its centre. The middle of the flag features a red maple leaf. This flag was made official by a proclamation from Queen Elizabeth II on January 28, 1965.

The physical geography of Canada is both vast and widely varied. The country stretches from the Atlantic Ocean to the Pacific Ocean. It shares borders with the contiguous United States to the south and the US state of Alaska to the northwest. The land of Canada includes forests, lakes, mountains, and glaciers. 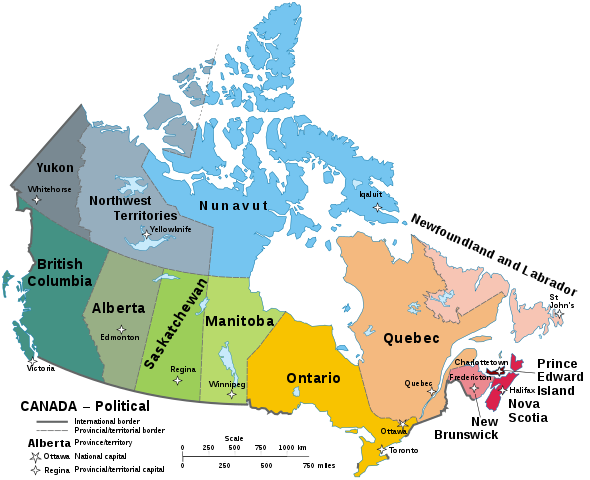 The climate of Canada is widely varied from region to region. The northern part of Canada is extremely cold and mostly covered by ice and permafrost. Southern Canada, where much of the population is located, has a temperate climate with four distinct seasons.

2. Canada has the longest coastline in the world.

3. Half of Canada is covered in forests.

4. The national animal of Canada is the beaver.

5. Canada is the world leader in uranium mining.

6. Canada has the longest highway in the world.

7. The national holiday, Canada Day, is on July 1st.

10. There have been 10 Nobel Prize laureates in Canada.