Chad is a country on the continent of Africa

The history of Chad is long and complex. The area that is now Chad is believed to be one of the places from where the human species originated; and it has been settled from as long as 6000 B.C. The earliest known civilization in Chad was a group called the Sao. These people were later taken over by the Kanem Empire. In the late 1800s, Europeans arrived in the area that is now Chad. In the early 1900s, Chad became a French colony––later becoming a part of French Equatorial Africa. Several years after gaining independence from France in 1960, Chad was immersed in a small-scale war with Libya. In the following years, Chad suffered from both internal conflict and fighting with bordering countries. 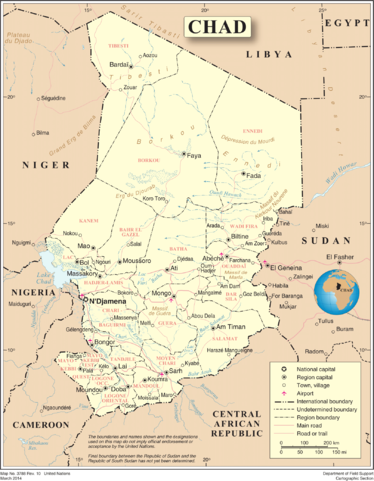 2. Chad has vast reserves of gold, uranium, and oil.

3. 80% of the Chadian people live under the poverty line.

4. Chad only has one television station.

5. Chad is the fifth-largest country in Africa.

6. The national symbols of Chad are the goat and the lion.

7. Chad is one of the poorest and most corrupt nations.

8. The country is named after Lake Chad.

9. Chad is known as “The Babel Tower of the World.”