Comoros is a country on the continent of Africa

Comoros is a group of islands off the east coast of Africa. These islands are believed to be the first place of contact between Asian and African people. The islands were inhabited by a variety of people over centuries and were first discovered by Europeans in 1505. The Portuguese were the first Europeans to visit the islands, but the French colonized them in 1841. Comoros became an independent country on July 6, 1975. In its short history, it has had many unstable years and a lot of civil unrest. This improved in 2001 when a new constitution gave each island more power to govern its own people. 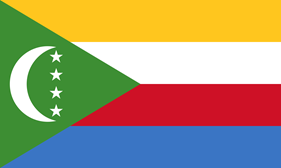 The Comoros archipelago consists of four islands located in the Indian Ocean. It is located between Madagascar and the southeast African mainland. The four islands are of volcanic origin and are surrounded by coral reefs.

Longest River: There are no major rivers in Comoros

The climate of Comoros is tropical, and it is warm year-round. There is a hot and rainy season from December to April and a relatively cool and dry season from May to November. Coastal areas have seasonal cyclones from January to April.

1. Comoros is the world’s second-largest producer of Vanilla.

2. The life expectancy in Comoros is 64 years.

3. Most Comorians farm and fish for a living.

4. Mount Karthala has erupted 20 times since the 19th century.

5. The official name of Comoros is the Union of the Comoros.

6. Comoros is the world’s largest producer of Ylang-Ylang.

9. The coastline of the islands combined is 340 km in length.

10. The national bird is the Comoros Blue Pidgeon.