Cuba is a country on the continent of North America

The first settlers of Cuba were the Guanahatabey, Ciboney  and Taino people. Christopher Columbus was the first European to reach Cuba in 1492, and he claimed the land for Spain. In 1511, Diego Velasquez conquered Cuba and founded several settlements. Many of the native people died of European diseases during Spanish colonization. To have workers for their tobacco and sugar plantations, Spaniards imported more than a million African slaves to Cuba. In its journey to independence, Cuba fought three wars with Spain: the Ten Years War, The Small War and The Cuban War of Independence. The US gained control of Cuba with the Treaty of Paris and gave it independence in 1902. From 1902 to 1959, The US chose several leaders to rule Cuba in order to protect the tobacco, sugar, and gambling industries. But in 1959, after a two-year guerilla war, Fidel Castro seized power. Castro declared the country a socialist nation and allied with the Soviet Union. 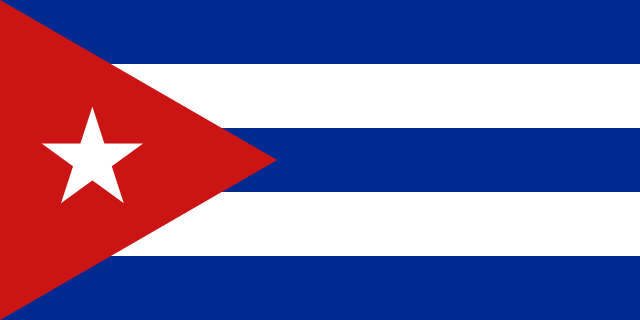 The National flag of Cuba was officially adopted on May 20, 1902, but it was designed by Narciso Lopez in 1849. The three blue stripes represent the three original Cuban provinces, and  the red triangle stands for equality and freedom.

Cuba is an island nation located in the northern Caribbean Sea.  It is a long and narrow island and is primarily flat with lowland plains. About one-third of Cuba is covered with mountains and hills.

The climate of Cuba is subtropical. It is generally hot and moist, with the average annual temperature being around 25 degrees Celsius (77 degrees Fahrenheit). Cuba has two seasons, a dry season and a rainy season. During the rainy season, tropical storms, cyclones, and hurricanes can affect the eastern part of the country.