The first Danes were hunters and fishermen that came to the country at the end of the last Ice Age––as far back as 10,000 B.C. There were farmers in Denmark by 3000 B.C., and by 200 A.D. the Danish people began using the rune language writing system. The Vikings rose to power in the 9th century, and the Viking Age lasted for about 250 years. The Vikings raided and explored many areas, including Russia, Turkey, Greenland, and North America. Following the baptism of Danish King Harald Bluetooth, Christianity began to spread across Denmark. In 1397, Denmark, Norway, and Sweden were joined into a single monarchy ruled by Queen Margrethe I. This was called the Kalmar Union, which eventually broke up after Sweden left in 1523. Denmark remained neutral in WWI, but during WWII the country was invaded by German troops, and an underground resistance developed to fight German rule. 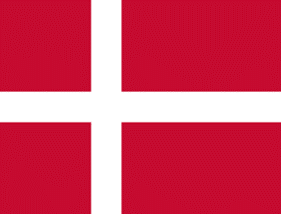 The flag of Denmark is a white Scandanavian cross against a red background. The flag is officially known as Dannebrog and is the oldest existing flag in the world, dating back to the 13th century AD.

Denmark is the southernmost of the Scandanavian countries. It is south of Norway, southwest of Sweden, and north of Germany. Denmark consists of the peninsula of Jutland, and 1,419 islands. Denmark’s terrain is mostly flat, with some low hills. 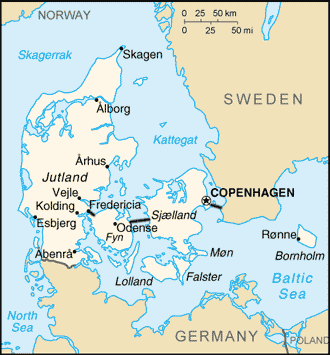 Denmark has a temperate climate, with cold and snowy winters and mild summers. The country faces changeable weather due to winds coming from the surrounding oceans.

1. The life expectancy in Denmark is 81 years.

3. Denmark is currently second in the UN’s Happiness Report.

5. Greenland is an autonomous territory of Denmark.

6. You’ll never be further than 52km from the ocean in Denmark.

7. LEGO was invented by a Dane.

8. 85% of the Danish population is Evangelical Lutheran.

9. Denmark is home to the world’s two oldest amusement parks.

10. Copenhagen’s harbor is so clean that you can swim in it.