Ecuador was inhabited by indigenous groups for thousands of years. These early inhabitants were hunter-gatherers and fishermen. These native peoples lived in isolated groups and clans. Then the Inca Empire arrived, and after years of fighting, the Incas gained control of the land in the 1400s. In 1534, Spanish conquistadors arrived in what is now Ecuador and claimed the area as a Spanish colony. Spain controlled Ecuador for the next 300 years. In 1822, Simon Bolivar and his armies defeated the Spanish and the area gained independence. At this time, Ecuador was among a group of countries called Gran Colombia. It wasn’t until 1830 that Ecuador became a separate country. 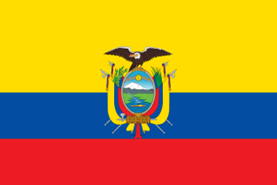 Ecuador is located in western South America and is bordered by Colombia and Peru. The physical geography of Ecuador is quite varied.  The country is home to snow-capped mountains, plains, highlands, and jungle. The Galapagos Islands, which are home to diverse plant and animal life, are located roughly 600 miles off the coast of Ecuador. The climate of Ecuador varies on location and altitude, but since Ecuador is located on the equator, most of the country has a humid tropical climate. The country receives more than 20 inches of rain each year. Ecuador has two seasons, a dry season and a wet season. 2. The national fruit of Ecuador is called guanabana.

3. Over 300 different types of bananas grow in Ecuador.

4. The official currency of Ecuador is the US Dollar.

5. Ecuador is one of the largest exporters of cacao beans.

8. Ecuador is known as the orchid capital of the world.

9. In Ecuador, garbage trucks play music as they drive.