Humans have inhabited what is now Eswatini (formerly known as Swaziland) for a very long time. Artifacts dating back to the early Stone Age have been discovered in the area. The present people of Eswatini originally migrated south to Mozambique before the 16th century. Due to conflicts with Zulu tribes, the Swazis were forced to move northward. By the 1800s, the Swazis were established in what is now Eswatini. One important leader of the Swazi people was Mswati II. At one point, he asked British authorities for assistance protecting Eswatini from Zulu raids. In 1906, The Kingdom of Eswatini became a High Commission Territory, under British rule. Eswatini remained under British control for many years, until gaining independence in 1968. 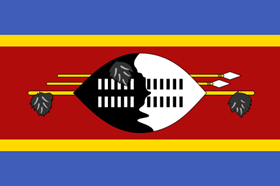 The national flag of Eswatini was adopted on October 6, 1968–one month after the country gained independence from Britain. It was designed by King Sobhuza II. The flag features a traditional black and white Nguni shield in the center, with a background of blue, yellow, and red stripes.

Eswatini is a landlocked country located in southeastern Africa. It is bordered by South Africa to the north, west, and south, and by Mozambique to the east. Eswatini has a diverse geography, with mountains, savannahs, and rainforests. 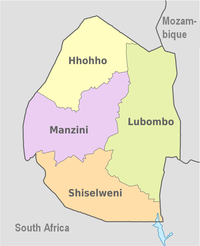 The climate of Eswatini varies depending on the region, but the general climate is characterized as subtropical, with two main seasons. Eswatini has hot and wet summers, and cool dry winters.

1. Eswatini has both black and white rhino species.

2. The main exports of Eswatini are sugar, wood pulp, and beef.

3.Eswatini is home to the world’s oldest mine.

4. Eswatini is one of the smallest countries in Africa.

5. The life expectancy in Eswatini is 60 years.

7. About 25 plant and animal species are endemic to Eswatini.

8. Eswatini is the only absolute monarchy in Africa.

9. The second-largest rock can be found in Eswatini.

10. Eswatini is home to some of the oldest mountains in the world.