Pygmies were the earliest humans in Gabon, and their existence can be dated back to 7000 BC. During the 13th century, Bantu tribes entered the area. The first European exploration of Gabon was during the 15th century, when Portuguese explorers came to the area. The Dutch arrived in Gabon In 1953, followed by the French in 1630. France occupied Gabon in 1885, and it became a part of French Equatorial Africa in 1910. On August 17, 1960, Gabon gained its independence. The first president of Gabon was Léon M’ba, who was elected in 1961. 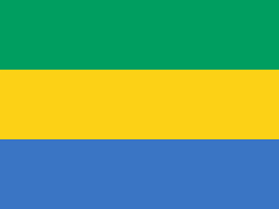 Gabon’s national flag is a horizontal tricolor of green, yellow, and blue. It was adopted in 1960 to replace the previous colonial flag. The green stripe represents forests, yellow symbolizes the equator, and blue represents the sea.

Gabon is located at the equator in west-central Africa. It is bordered by the Atlantic Ocean to the west, and also borders Cameroon, Equatorial Guinea, and the Republic of Congo. Gabon is a tropical country with a moist, hot climate year-round. The hottest month in Gabon is January, and the coolest month is July. Gabon receives high annual rainfall.

2. The equator passes through Gabon.

4. Over 11% of the country is protected parkland.

9. Gabon is home to the leatherback sea turtle.

10. Gabon is home to most of Africa’s gorillas.