The Bahamas are a country on the continent of North America

As early as 300 to 400 AD, people from Cuba migrated to The Bahamas and lived on seafood. Then from around 900-1500 AD, the Lucayan people settled on the islands. When Christopher Colombus arrived in the New World in 1492, there were about 40,000 Lucayans residing in The Bahamas. Within 25 years after Columbus arrived, all of the Lucayans were wiped out due to the slavery, diseases, and hardships they were faced with. Later in 1649, English Puritans known as the Eleutheran Adventurers came to what is now The Bahamas in search of religious freedom. During the late 1600’s and early 1700s, many privateers and pirates came to the islands to bury treasure and steal from merchant ships. American colonists loyal to Britain came to The Bahamas during the late 1700s. On July 10th, 1973, The Bahamas became a free and sovereign country. After 350 years of peaceful British reign, The Bahamas became a member of The Commonwealth of Nations.

The national flag of the Bahamas consists of a black triangle located on the left side, and three bands, the top and bottom being aquamarine and the middle one being gold. The black represents the strength and willpower of the people, the gold represents the sun and sand, and the blue represents the Caribbean sea.

The Bahamas are an island nation located in the Caribbean sea. It is located 80km (50 miles) southeast of Florida, and north of Cuba. The Caribbean island group contains about 700 islands, nearly 2,500 small islets or cays, and more than 2,000 coral reefs. The Bahamas have mainly long, flat coral formations with some hills. It is known for its beaches and clear, Caribbean water. 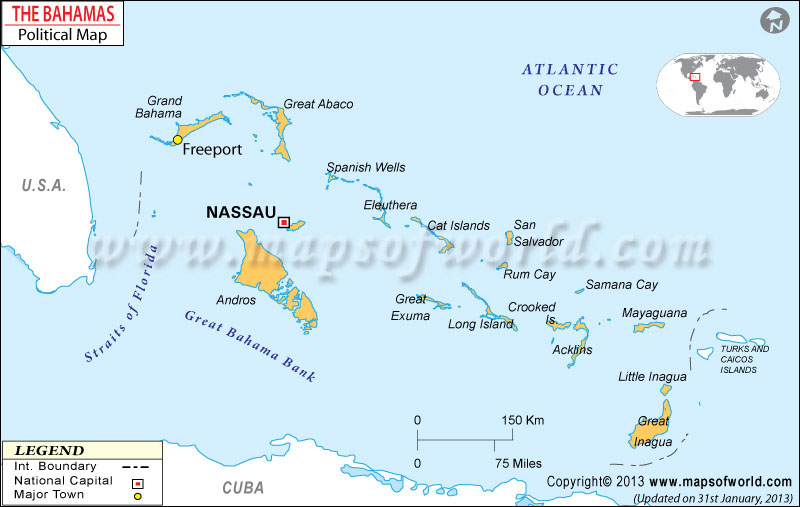 10 facts about The Bahamas

1. The blue marlin is the national fish of The Bahamas.

3. The world’s deepest blue hole is found in The Bahamas.

4. It is is one of the best places in the world for cave diving.

5. There is no sales or income tax in The Bahamas.

6. There is a beach in The Bahamas where you can swim with pigs.

7. The Bahamas has the world’s third-largest ship registry.

8. “Bahamas” is derived from Spanish, and means “shallow sea.”

9. The Bahamas is one of two countries that start with “The”

10. The Bahamas is home to a pink beach.