The Democratic Republic of the Congo

The Democratic Republic of the Congo is the second-largest country on the African continent and has more than 200 different ethnic groups. The area was inhabited by native people for thousands of years, and human remains have been found that dated to 90,000 years ago. These early people were Central African Foragers, and the Bantu people reached the area around 3,000 years ago. The Kingdom of the Kongo ruled what is now the western part of the DRC between the 14th and 19th centuries. The area was negatively affected by the Atlantic slave trade from approximately 1500 to 1850. Belgian King Leopold II came to the area in 1885 and claimed it as his colony. By 1908 the Belgian government had control of the area. In 1960 there was an uprising by the Congolese people and the country became independent. A leader named Mobutu changed the name of the country to Zaire in 1965, but when he lost power in 1997 it was renamed the Democratic Republic of the Congo 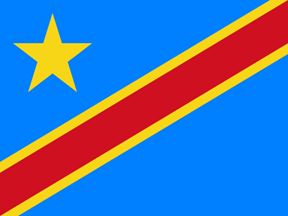 The national flag of the Democratic Republic of the Congo is sky blue with a yellow star in the upper left corner. It also has a diagonal red stripe from the lower left to the upper right which is bordered with thin yellow lines. The blue color symbolizes peace, the red represents the blood of the country’s martyrs, and yellow represents its wealth. The star symbolizes the country’s bright future. This flag was adopted in 2006.

The DRC is located in central Africa on the equator and has a short Atlantic Ocean coastline. The country’s middle region is the Central Congo Basin. There are uplands north and south of the basin and highlands in the east. The DRC is a large country and includes rainforests, swamps, plateaus, plains, and mountains. 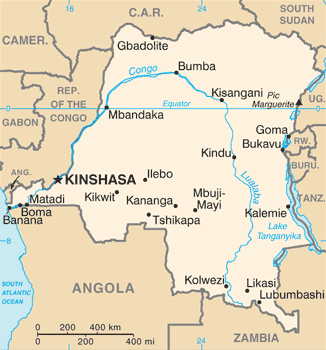 The Democratic Republic of the Congo has a tropical climate with high temperatures. The country receives a lot of rainfall and has high humidity. The DRC receives at least 48 inches of rainfall each year. In the north, the rainy season is April through October and the south has its rainy season November through March.

10 facts about The Democratic Republic of the Congo

1. The Congo River is the deepest river in the world.

2. The DR Congo is about one-fourth the size of the USA.

3. The average lifespan in DR Congo is about 61 years.

4. Only 10% of people in the DRC have access to electricity.

5. The DRC is the second-largest country in Africa.